We knew that we were going to have to take Squirms on her first “trip” soon. The idea of traveling with an unpredictable newborn is daunting, but we knew postponing would make us lose our nerve.  So, with Grandad and Grammy by our sides, we boarded a train to Segovia with our 19 day old daughter.

Segovia is a town a little less than 100 km from Madrid, an approximate half hour train ride. Even though they are close in distance, the two cities couldn’t feel more different.  Madrid is a modern city that’s still hugging her history while Segovia only allows in modern life by necessity. Segovia knows tourists come to see her past.

And history we saw!  As soon as we entered Segovia, we were smacked in the face with potentially the oldest piece of architecture we may ever encounter… the Roman Aquaduct. 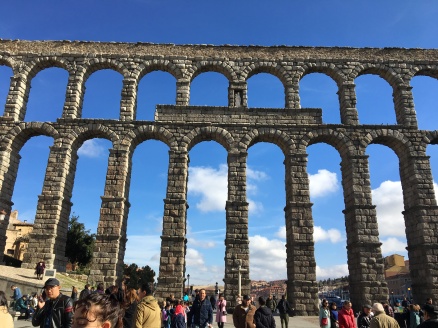 Built in the FIRST century, the Aquaduct runs from the walled castle to the other side of town.  It’s visible throughout most of Segovia and man, is it a sight.  Interesting fact, if you look closely, you will see that this massive, ten story structure that was built 2000 years ago doesn’t even have mortar holding the rocks in place.  Amazing.  And look at how every stone is exactly the same shape and size.  All without modern tools.  Unbelievable.

Like many European cities, Segovia’s cobblestone streets are primarily for foot traffic.  Squirms loves a good cobblestone street and for that reason, so do we.  We took a leisurely stroll to Segovia’s Plaza Mayor, which is charming and idyllic.  It even has  a gazebo in the center. 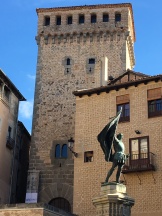 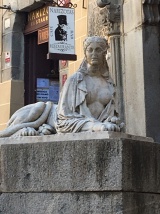 The most eye-catching building in Plaza Mayor is the huge Segovia Cathedral.  It was built in the mid 1500s and still holds weekly services.  On the inside, there are eight chapels, an ornate ceiling and the grave of Saint Valentine (Jury is still out if it’s that Saint Valentine).  You don’t have to be religious to appreciate the devout details.  This is a place where you stand in awe. 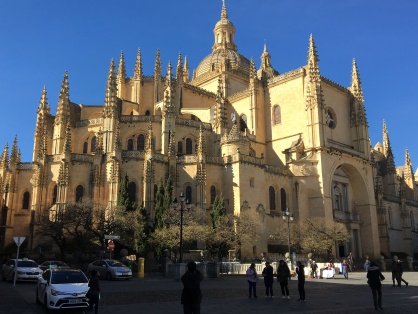 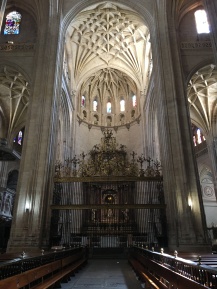 After the cathedral, the moment I had been dreading was upon us.  Segovia is popular for three things…the Aquaduct, the Cathedral and…suckling pig.  Yep, just like the one you dissected in 9th grade Biology class.  We went to the place to have suckling pig, Meson de Candido, owned for decades by the mayor of Segovia.  Apparently he is a bit of a rock star.  Many people were standing in line to have a photo-op with him. Not sure why, but below is a picture of Dan, the mayor and Squirms. So bizarre.  🙂 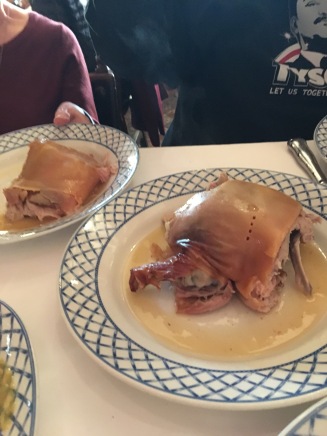 I promised myself that I would try the poor piggie, which I did, and hated myself afterwards. Not for the reason you would think either.  The pig was delicious.  The meat was super tender and juicy.  I hate the possible consequences that might happen if I say how much I enjoyed it, so I will leave it at this.  There is a reason why this is one of the things Segovia is known for and if you happen to visit Segovia, do yourself a favor.  (Sorry piggies)

We had such a nice day that we will be visiting Segovia again this summer when two of my favorite humans join us for the month of July.  Apparently the Cathedral at night is too gorgeous to miss.

So…are we crazy for traveling with an opinionated infant?  Maybe… but Squirms did so well that we’ve decided to push the envelope.  Next week, we take our first weekend getaway.  The destination?  Valencia!